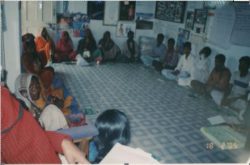 1. Objectives
• To provide Safe Drinking water and sanitation for 868 households (4340 total dalit population) of dalit in four VDC’S of Mahottari.
• To make a Dalit Organization in all the four VDC’S
• To develop local leadership among the dalits
• To Make the dalits aware about their constitutional and citizenship rights
• To Mobilize dalit men and women against social evils, i.e. Dowry system, Child marriage, Child labor, Untouchability, Gender inequality particularly against the girl child and cultural violence against women.
• To insure their proper participation and share in the village political affairs and economic resources.
2. Duration: July-2005 to June-2004

• 23 women one from each group has taken the lead and is regularly holding meetings and collecting money.
• 20 women and 24 men learned the skills to use and maintain H/P and P/L.
• They make a decision to save Rs 5 every month in each group by themselves for the maintenance.
• The participants of various caste came together to learn about the use of common H/P, thereby increasing cooperation between various dalit and non-dalit castes.
• 240 dalit and poor households are now using safe drinking water.
• 480 females (women and girls of the above mentioned households now do not waste time in fetching unsafe drinking water from the ponds and far off places.
• Certainly the water borne diseases will be reduced. (Actual results will be assed in the rainy season).
• The common use of safe drinking water has certainly brought various dalit castes together and has helped them to unite and form a VDC level dalit organization.
• The appropriate water management through H/P and sanitation through P/L has helped in keeping the environment clean and hygienic.
• The approach roads of the villages/Wads where the P/Ls have been installed are now not littered with human excreta.
• The numbers of cases of income generation activities have started in each group. (Some of the examples of income generation is given in Annex-1)
• In the classes there are 505 women and 48 men participants.
• The participants became aware about women’s role, rights and responsibilities; as a result they have started sending their girls to school.
• They have now taken interest on women related issues like domestic violence, witch hunting (boxi) etc and have come to RCDSC office with their problems and have also taken group action against drunken husbands.
• 117 members of the savings credit groups from the 4 VDC participated in this training 107 were women and 10 were men.
• The woman groups of Simardahi cleaned the roads of their village and started a campaign to educate and request their neighbors not to allow their children’s to use the roads as toilets. This training helped to increase the demand for Pit Latrines as initially very few and particularly none of the dalits were interested in installing and using pit latrines.
• 11 member Dalit Samasya Samadhan Samiti (DSSS) has been formed in all the 4 VDC’s.
• To work for the increase of the participation of the dalits in the decision making forums of the VDC.
• To take up and tackle the day-to-day problems of the dalits like, untouchability within dalits, discrimination by upper castes, citizenship, birth certificates, tenancy rights, proper agricultural wages, indebt ness etc.
• They started taking up the citizenship and birth certificate issues with the VDC secretaries.