Including the Excluded Dalits: Through Gender, Development and Participatory Interventions 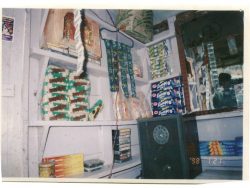 A retail shop, established by a member of savings and credit group by taking loan from the group