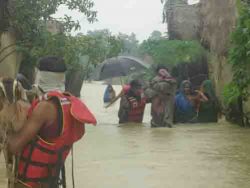 1. Objectives
– To reduce vulnerability of the poorest community through prevention/mitigation of floods in selected 4 VDC’s of Mahottari.
– Increased awareness and preparedness of people of selected VDC’s on water induced disaster.
– Increased livelihood opportunities for the dalit and women flood victims and flood-affected people of Mahottari through income generation, appropriate land and water management, sand resistance farming and market based development.
– Increased coordination/linkages with stakeholders and line agencies, to contribute to appropriate changes and formulation of disaster management policies and practices.

– The awareness for flood control and relief fund at the VDC level and a preparedness plan at the district level if completed will certainly have an extra impact and 5.5 month does not seem to sufficient for it. Moreover, the Pond project seems to have a potential to benefit more than 100 flood affected families and increase their income for a long term.

– The district level advocacy became difficult because of instable government stakeholders who were all the time changing.

– The targeted 471 households in 4 clusters were made aware on flood preparedness. Advocacy was carried out at both the district and VDC level for different purpose. Moreover, the volunteers were trained to do advocacy.
– 471 household’s capacity was increased on preparedness. 20 savings credit groups and 20 Flood management committee strengths were increased through various trainings.
– 345 members of the savings credit groups were made aware on public heath and mitigation methods.
– 74 families have initiated different income generation activities.
– The awareness of poor women and men and children have increased on preparedness from floods and they now pay attention on hygiene but 5.5 month is a short time to assess real change.
– Men and women have started sitting in the meetings together which is not a custom in the terai where women live behind veil and their movement is restricted.
– The VDC and the district level stakeholders are committed to establish a flood control and relief fund at the VDC level and disaster preparedness plan at the district level.
– The project has been highly cost effective as it spends only NRs415 per targeted population.
– The employment of the local field workers and staff helped in the smooth implementation in spite of the political turmoil in the country.